FUN FACTS: Amazon has more than 90 Million US-Based Amazon prime subscribers.  And the average prime member spends $1300 a year.  And get this, they offer more than 353 Million products based a nchannel.com article earlier this year.  So, is there anything  that amazon doesn’t carry or sell?  Of course.  That’s what this holiday edition post is all about to reveal.  But if you scroll and skim too fast, you’ll miss it.  Let’s find out together what secret holiday gift everyone wants but can’t buy on Amazon.

Some holiday gifts are not for sale.  And they’ll never be. Along with that, it’s also worth noting that our christmas and holiday gift lists change with age.  Wouldn’t you agree?  And they also change with the times.  But there’s a gift that everyone I’ve met who hasn’t reach a certain level of success secretly wants but doesn’t get and doesn’t know how to get.

Let me give you an example. I mean, there was a time that getting a walkman for Christmas would have been the dream.  I remember… I think I wanted an Aiwa walkman with the flat buttons on it so I could chill with my tunes in my ears commuting to school in New York City in the 90’s.  Are you kidding me?  If I could get that walkman, if-I-could-just-get-THAT-walkman…MAN! Life would be perfect.  I would be set for life with my cassettes – yup, cassette tapes.  Yes.  And if you were to hand a kid today an Aiwa walkman today, they’d start looking for the cameras to find out if they were on a prank show.

See?  Times and needs and wants change.  Would I want that Aiwa walkman today? Sure. For the novelty of it, I would. But not because it would transform my life.  And that’s what I’m getting at.  The older we get, the more transformation we want but feel we can’t ask for. So it becomes a secret.

Holiday Offer – The Amazon Card vs. Your Secret Gift

If I offered you:

Gift 2. The secret gift of being unstoppable, to breakthrough any obstacle, impossible situation or circumstance life threw at you without crumbling – which gift would you go with?  Be honest.

The material world comes from the non-material realm of thought.  Not get too metaphysics on you.  But it’s true.  And after meeting and talking to 100’s of people who I’ve met at personal development seminars or that have been clients or that I’ve attended a networking event with, I haven’t met too many people that would gladly take the second gift. Why? Because the assumption is that we already have the ability to breakthrough any obstacle, impossible situation or circumstance life throws at us.  But you and I know that’s not true.  A chunk of the people you know can’t handle being stopped at a red light or cut off on the expressway without letting it ruin their life, let alone the deeper trails of life that come in the form of a business venture that’s not taking off as fast as they’d thought.  Or the ending of a marriage. Or the loss of employment or even a facebook friend.  This is the delusion.

What Everyone Wants But Can’t Get On Amazon 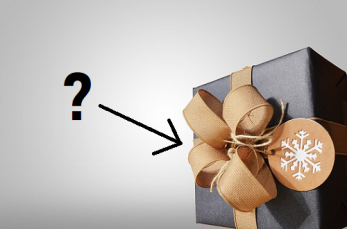 But deep down, what I am willing to bet my life on that everyone wants but can’t buy on Amazon is being able to experience themselves as UNSTOPPABLE, able to get out of their own way to reach their goals and find their voice.  But not everyone accomplishes that.  And if there was a holiday  gift that I see everyone wants but few know how to get – it’s the gift of unstoppability.  And like I said, it’s not available on Amazon unless you buy a book on the subject or study the lives of the successful.

So, now the question is how do you get that gift if you don’t fully experience you have it?  That’s the billion dollar question.  And I’ve realized that failure is the teacher that holds this answer.  And it’s hard to learn from a teacher that you refuse to learn from.  So, when most people say their fear failure they really are saying they don’t want to learn how to be unstoppable.  Because that’s the ultimate lesson and gift failure has to offer.

Here’s How to Get The Gift

This holiday season, give yourself the gift of being unstoppable.  Start by looking at:

Then begin to consider that this next year or next 12 months could be your time to give yourself full use of your gift by setting goals just beyond your comfort zone.  And then creating specific goals in each of the areas mentioned above.

For example, how do you ensure this year you’ll gain a deeper believe within?  How would you measure that? You have to create you metric.   What relationships would you like to gain and replace the lost one(s)?  Write that down.  How much money exactly are you shooting for this time? Write that too and throw it in a spreadsheet.  And on and on. Don’t cheat yourself on this exercise.  I offer some guidance on this in the 24 Hour Blueprint Playbook.  The bottom line is now is never a good time to quit no matter how tempting it is.

The process of striving and pushing through the muckitty muck will reveal to you a power that’s rarely untapped by so many who say they want to win, but don’t and can’t. So, I’m sorry, Amazon doesn’t sell unstoppability, but if you look at Jeff Bezos story, it was built from that spirit.  And perhaps that’s the book to buy 🙂 The story behind Amazon’s multi-billion empire.

PS: Here’s My Gift to Your Today and it’s NOT on Amazon either.  But it should help you on your way towards being unstoppable. It’s a step by step how-to guide for time management which is one of the challenges people face when taken on the task of getting to their next level.  So, download a complimentary copy. And enjoy it.