The *NEW VIDEO* has been added at the bottom.

So, I’ve been doing some soul searching and digging to make sense of the world these last few weeks.  And I recently have been doing my best to understand the story behind the headlines we’ve been presented in the media.

The videos below are ones that I found which answered a simple question – Why or how are these death tolls so high?  And a bonus question was, are these numbers even accurate? Below are two videos that addressed those questions and more.

The first video is by David Icke, an author and speaker who reveals that there’s a hidden elite behind the sinister events in the world that are positioned as a crisis in order to justify taking people’s rights away without making it too obvious. (This will make more sense to you as you watch his video below and other talks he has given online.) Examples of this are the virus of course, food production and GMO’s, famine, economic disparities etc.

The video below is David’s response to having his videos taken down after calling out the medias inconsistencies behind the public narrative of the pandemic.  And basically, what happened was this: His videos were taken down off of Vimeo.  And according to him, the fact that his content was censored confirmed the validity of his observations and underscored that the “Satanic Elite”, as he calls them, were afraid of being exposed for the lies being told to the public through the media.

The explanation of why the covid-19 deaths reported have been so high is in the video below. And it comes at 54:55.  You can start listening from that point or watch the video from the beginning.  The interview is between him and his son.

Explanation No. 2 – Why the COVID-19 Death Toll is so High by Dr. Eric Nepute (Start to watch at Time Stamp 5:55 and all the way through)

The second video is by a Chiropractor, Eric Nepute who’s fed with the misleading information being provided to the American public. His passion and conviction of wellness and self care is inspiring. Watching the entire video from beginning to end is recommended but if you’re in a hurry, start watching at 5:55 to the end. 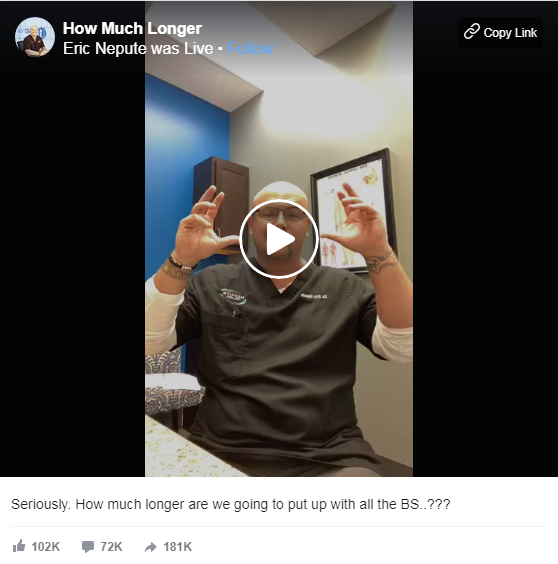 Dr.’s Are Being Asked to Inflate the Numbers

Ready to Stop the Virus and Move on With Your Life?

Podcast Now Playing: The Blueprint to Becoming the One