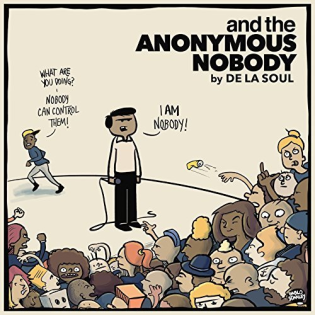 It’s been a while since I’ve shared a What’s He Listening to Now post.  And it’s overdue.  Today’s post is all about De La Soul.  Real Hip Hop fans need no introduction to them and I won’t insult anyone by re-pasting a Wiki blurb about them.  All you should know is that De La Soul just like the name sounds is all about SOUL.  And I stumbled upon a music video, called Drawn from their 2016 album titled, “and the anonymous nobody” when I awakened to the group still being alive.  I didn’t even know they were still making music.  And as I listened to their entire album on Spotify again and again and again…I couldn’t believe that not only did I miss this album when it came out, but NOBODY told me about it.

But here’s the good news. De La Soul is alive and kicking.  And this album honestly reinvigorated my faith in hip hop as one of America’s last poetic art forms of expression.

The album is funny, whitty, charming and most of all inspiring.  This goes into my “best albums of all time list”.  That’s not an exaggeration.  Listen for yourself and let me know if you agree.  Use the comment section below. That said, enjoy.